Our county is naturally great in outdoor resources. 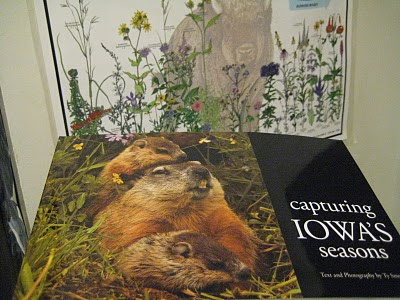 I didn't get a photo of the event this evening -- the lighting was very dim. Here was the take-home, an autographed copy of _Capturing Iowa's Seasons_.

I've loved Ty Smedes' nature photos (and the Scarths' photos) for years. As a guest of the Polk County Conservation Board (PCCB) volunteer banquet (representing Troop 888), I got to meet him as a guest speaker. His last name is two syllables -- I've always said it with one! He gave backstories that showed discipline in seeking great nature photo-making.

Smedes also gave a preview of his next book (due on May), which tells the story of the bald eagle in Iowa. Did you know that it first nested here (after a 72 year absence) in 1977 in Allamakee County?

My husband and I sat with PCCB's Pat Spain, Carrie Spain (JPEC), and Dennis Parker, as well as two volunteers. As the Planning and Outreach Coordinator, Pat gave a lot of information during the award portion of the evening's program. I'll share some here with you for consideration.

Email ThisBlogThis!Share to TwitterShare to FacebookShare to Pinterest
Labels: pccb