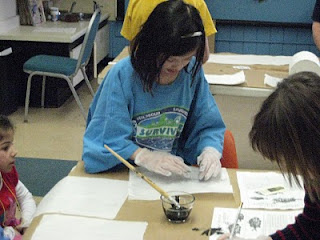 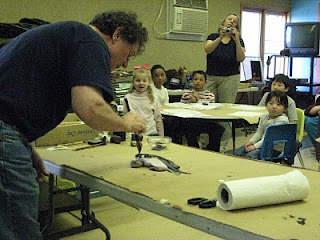 Our presenter was Mike Delaney, president of Raccoon River Watershed Association. He wore a shirt that had a fish print screened on the front. The print was meaningful as it was caught by one of his children. It was very cool! Since crappies are his recommendation for fish printing, he also spoke about local fishing, fish handling (catch and release = don't wash off the mucus coating; gyotaku = wash the mucus off, stroke in the direction of the scales), fish anatomy, nitrates in the Raccoon River (check this cool EarthCache GC1557G that I worked on and have yet to send in the info), the Dead Zone in the Gulf of Mexico, and Japanese culture. Of course he gave tips and tricks to make a great fish print -- clay, straight pins, and the all-important card for an eye-circle. 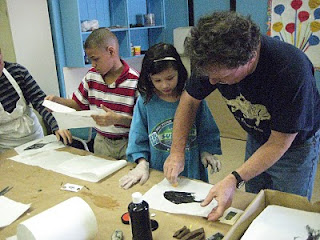 Gyotaku is an example of how nature can be involved in a family's life. It takes the wholesome activity of fishing to another level, similar to geocaching moving a hike to another level. With a large-scaled fish, tempera paint, and Japanese calligraphy paper, you can make keepsake art to display in a frame or scrapbook to bring nature into a more prominent place in the home.

In the above photo, Delaney is placing his hanko on the print -- his signature -- since no one could write the kids' names in Japanese. (It's just like a Chinese chop.) It really added to the coolness of the print. He also suggested doing as the Japanese do -- in addition to your name, write the fish identification ( I would say 'name of fish,' but that sounds like you've christened it and made it a pet), date, and witnesses' signatures to your print.

Kids just really like touching dead fish for some reason. One boy in the class said, "Awesome!" Every two minutes. Seriously. I don't know if it's that kids don't touch fish in everyday life, excitement over seeing the colors and patterns and scales up close, being able to study fish because they are not moving, I have no idea, but everyone seemed to like it. 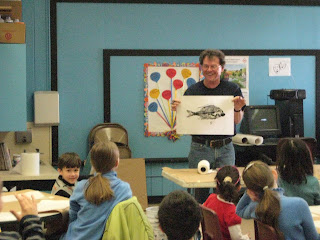 Email ThisBlogThis!Share to TwitterShare to FacebookShare to Pinterest
Labels: gyotaku